We were so excited to be featured in the recent article in the New Braunfels Herald-Zeitung newspaper about Shop Small on Small Business Saturday! Here’s a link to the article and the full text is below. Thank you for shopping small in New Braunfels! 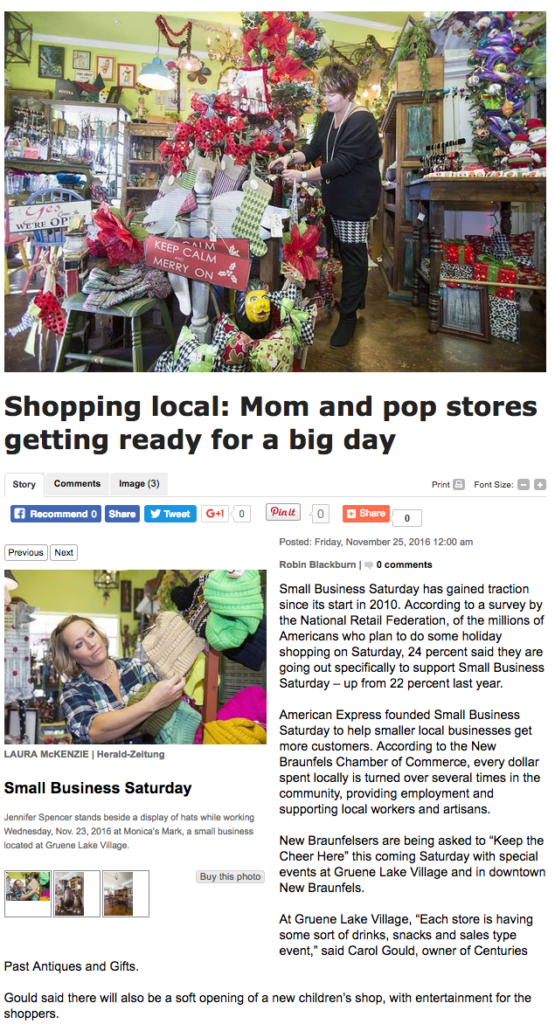 Small Business Saturday has gained traction since its start in 2010. According to a survey by the National Retail Federation, of the millions of Americans who plan to do some holiday shopping on Saturday, 24 percent said they are going out specifically to support Small Business Saturday – up from 22 percent last year.

American Express founded Small Business Saturday to help smaller local businesses get more customers. According to the New Braunfels Chamber of Commerce, every dollar spent locally is turned over several times in the community, providing employment and supporting local workers and artisans.

New Braunfelsers are being asked to “Keep the Cheer Here” this coming Saturday with special events at Gruene Lake Village and in downtown New Braunfels.

At Gruene Lake Village, “Each store is having some sort of drinks, snacks and sales type event,” said Carol Gould, owner of Centuries Past Antiques and Gifts.

Gould said there will also be a soft opening of a new children’s shop, with entertainment for the shoppers.

Gould said she hopes there will be a good crowd for the 20 or so shops in Gruene Lake Village on Saturday.

“I think there will be,” she said. “Sometimes on Black Friday there’s not, but on Saturday there is.”

Shoppers heading downtown will find some special events and sales on Saturday as well.

“The New Braunfels Downtown Association is going to be celebrating its 50th year in 2017. We have been champions for small businesses in our area for a very long time,” said April Weilbacher, president of the Downtown Association. “We’re firm believers that you can find every gift opportunity in downtown.”

Different businesses in downtown New Braunfels have planned different events for the day, Weilbacher said. Red Stag and La Belle Vie will have Santa in an antique sleigh on the sidewalk for free photos, and stores will be serving beverages, according to the Downtown Association. At the Farmers Market, Santa Claus will make an appearance from 10-11:30 a.m. Children will have the chance to make a craft with Santa’s elves, and crafts vendors will be set up at the market.

At McAdoo’s, located in the historic post office, children can send letters to Santa. The restaurant will have helpers assisting with postcards and a vintage mailbox. The postcards will be mailed to the families days later as souvenirs stamped by Santa. Adele Kerr is having its first Fall Market with a tent sale and food trucks from Friday through Sunday. Huisache Grill, Princess Be, The Crossing, Lot 59 and Nash Bros. will hold a “mingle and jingle” from noon to 9 p.m. Saturday. Shoppers who visit each location at the Grassmarket and get stamps on their passports can enter to win one of five gift baskets.

“As president of this organization, I love seeing these businesses think innovatively about the consumer,” Weilbacher said.

Small Business Saturday not only supports the local economy, it also has some immediate advantages over rushing to larger stores for holiday shopping.